LEARN ABOUT CUTS OF BEEF

Beef is first divided into primal cuts. These are basic sections from which steaks and other subdivisions are cut. Since the animal’s legs and neck muscles do the most work, they are the toughest; the meat becomes more tender as distance from hoof and horn increases. Different countries have different cuts and names. 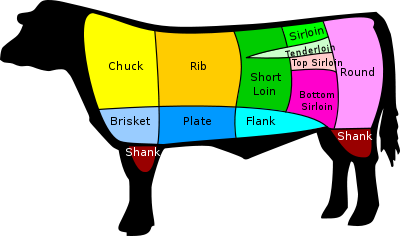 The following is a list of the American primal cuts. Beef carcasses are split along the axis of symmetry into “halves”, then across into front and back “quarters” (forequarters and hindquarters). Canada uses identical cut names (and numbering) as the U.S. system, except the part designated as “round” is known as “hip” in the Canadian system.